Written in the Sand: A Fascinating Find!

If you’ve ever written anything, looked at a flyer, or read a sign, then you’re familiar with fonts. Fonts are the style in which words, phrases, letters, and numbers are presented. Some were created for readability, while others bring a certain flair to the material. During a recent beach stroll along the Gulf of Mexico, fonts came to our author Elaine A. Power‘s mind as she observed markings in the wet sand. Instead of Sanskrit, Script, or Sans Serif, she decided the ‘writing’ in the sand was Sand Script. Read on to see and learn more about her fascinating find!

This one looks like the beginning of a message. Maybe if I’d been more patient, I would have seen the finished effort. What was the writer trying to convey? Is a letter being formed — or perhaps a drawing? The line is reminiscent of a bird’s head. Or maybe it’s an otter, Lutra canadensis. They do live in the area and are known to consume seafood. Is this a warning about area predators? 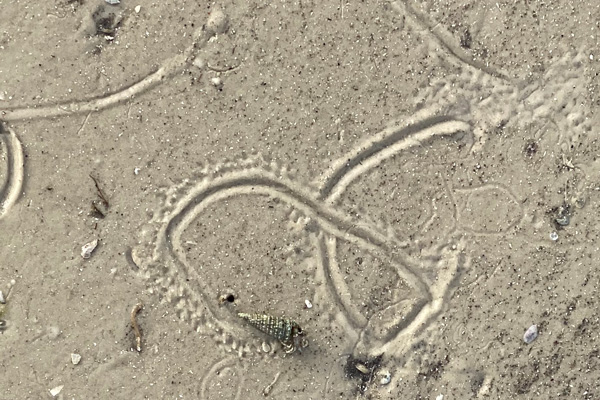 Is this the beginning of an ampersand, or perhaps a capital G? Maybe, the writer is spelling out its name. Or perhaps, this is a music lover and creating a treble clef before adding the musical notes. I would love to witness a musical composition from a sea creature. 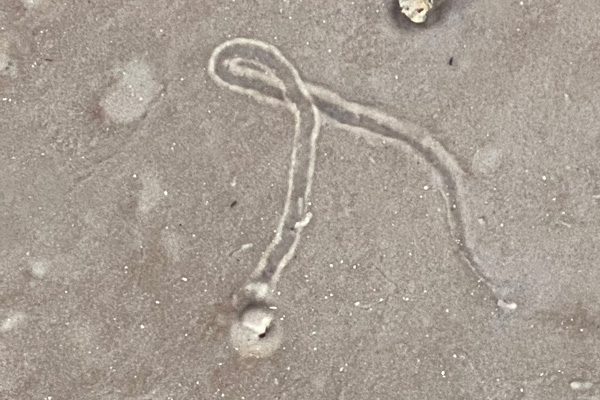 Could X mark the spot? What treasure lurks beneath the grains of sand? I didn’t want to disturb the marks, so the mystery remains unsolved. This one had an artistic flair, complete with swoops and ribbons. A bird even stopped by to take a look or perhaps contribute to the art. Many human cultures used hieroglyphics to relay information. Maybe, the seashells employed the same technique? 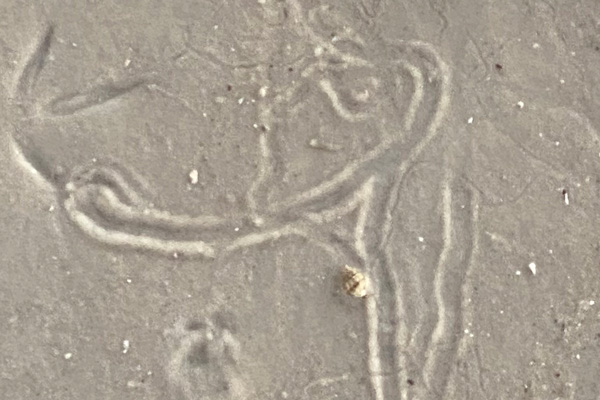 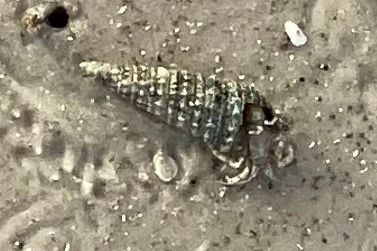 Who’s responsible for these scribblings in the sand with the Sand Script font? It’s the work of hermit crabs, Clibanarius vittatus! Hermit crabs have soft abdomens, so they must protect them. Once snails depart their gastropod mollusk shells, hermit crabs are famous for moving right in. Their head and limbs extend out of the shells, allowing the crab to move about and create grooves in the sand. The crab writer below is occupying a cerith, Cerithium stratum.

This species of the hermit crab is very tough, able to withstand desiccation when the tide leaves the intertidal zone dry; many hermit crab species can’t survive this harsh environment.

Unfortunately, these scribblings last only as long as the low tide. The missives are erased with the returning waves. However, the opportunity for more ‘writing’ will return with the next low tide.

I don’t know why the hermit crabs move in such interesting patterns. Are they like the spider in Charlotte’s Web, trying to communicate with people? Or are their wanderings, random or purposeful, merely an attempt to find a safe location until the seawater returns? We’ll never know until they enhance their communication skills. I hope you’ve had a moment of amusement with these musings in the moist ocean margin.

If you or a little one in your life is interested in beach and oceanic creatures, our workbooks are hear to add a big heap of fun to learning.