What’s so Bad about Animal Adaptability? 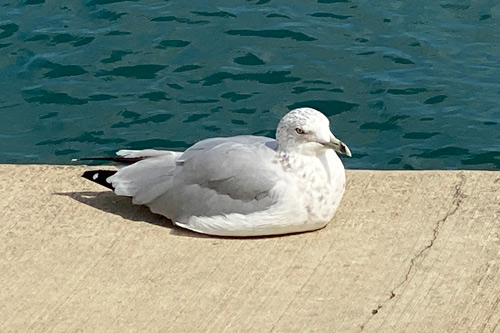 Recently, I exhibited at the annual Printer’s Row Lit Fest in Chicago. While there, I strolled along Lake Michigan and came across a herring gull sitting contentedly on the side of the seawall. I was struck by how unconcerned this wild bird was despite the throngs of people walking and wheeling past. It got me thinking about adaptability in animals, particularly in gulls and the curly-tail lizards that inspired my Curtis Curly-tail series.

Sometimes, it’s easy to forget that the animals we see each day did not evolve alongside humanity. Instead, they evolved to live in a world without people. Some of them not only survive in human cities and towns, but they also thrive. Gulls are one of these species. That includes Herring Gulls, like my little friend in Chicago, pictured above.

The Plight of Herring Gulls

Herring gulls are omnivores, and not at all particular about the food they eat. In ideal situations—that is, in the absence of humans—they consume fish, insects, small mammals, eggs, bird chicks, but also fruits and seeds. They’re also known to scavenge, which, unfortunately, has led to some people speaking about them in derogatory terms. Gulls’ primary environment is coastlines and shorelines. As this habitat increasingly shrinks, so do their natural food sources. Consequently, the number of coastal gulls has also decreased.

The Advantages of Co-existing with Us

Some animals, however, have learned the advantages of co-existing with people. Cities certainly reduce the number of natural predators, which is a plus for prey animals. In the case of gulls, very few large birds of prey or foxes patrol human communities.

Humans also serve as a source of food, even if most of it isn’t nutritious. For instance, birds follow fishing boats and hang around piers where fish are cleaned or left. Garbage dumps often contain edible tidbits. And of course, anywhere people congregate for recreational activities is sure to provide food via the trash left behind. Naturally, gulls congregate around these food-providing areas. This has led to complaints from those who dislike the noise and mess. In my opinion, we have no one to blame but ourselves.

Interestingly, gulls also observe how humans interact with the items around them. They learn not only if food is available, but which of the items being handled are food. Researchers discovered that herring gulls are more likely to taste an item on the ground if humans pretended to eat it first (Madeleine Goumas, University of Exeter). The gulls use human behavior to their advantage.

What if a gull thinks you’re a food source? It’s been found that making eye contact with one will make it flee. Despite living amongst humans, some wild instincts do remain in these wild birds.

What Gulls Have in Common with Curly-Tails 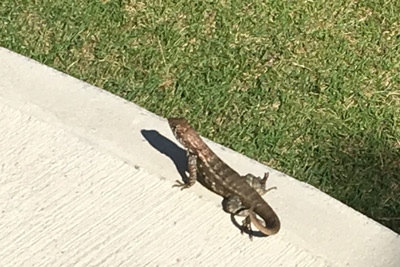 Curly-tail lizards are another animal that has adapted to humans. These lizards are native to the Caribbean. There, they have been negatively impacted by dogs, cats, and rats. All species introduced by people. Additionally, development has resulted in the usual habitat loss, causing some curly-tail species to change their behavior.

Curly-tails, like gulls, are omnivores and willing to eat just about anything, including human food. They tend to be ambush predators, quietly waiting for their prey to come into striking range. Insects and smaller lizards are typical food species. Of course, in urban settings, the curly-tails must adapt to eating discarded human food to survive. This skill has allowed their numbers to increase in non-native locations.

The Bad Part of Adaptability and Expansion

My book, Curtis Curly-tail is based on the species Leiocephalus carinatus. In the 1940’s it was introduced to the island of Palm Beach, Florida. A couple of decades later, the original twenty pairs had colonized twenty blocks. By 1968, it was determined that curly-tails spread to the mainland and were rapidly expanding throughout South Florida. This may have unfortunate consequences for native species in the area, especially the local lizards.

Encroachment may force gulls, curly-tails, and other species to adapt to a human environment. Some may even thrive, but it doesn’t always mean it’s for their benefit or the benefit of other species.