The Buzz on World Bee Day!

What do you think of when you hear the word bee? The fuzzy little honey bee going about its “bees-ness”, flitting from flower to flower, then returning to the hive to make some honey? As for me, I only think of springtime in the beautiful Sonoran Desert and the nearly 1,000 species of native bees that call it home. Since today (May 20th) happens to be Word Bee Day, I thought I would share some amazing facts about our local pollinators.

Do you know what type of insect bees are? They are nearly all herbivorous insects in the order Hymenoptera (bees, wasps, ants, etc.) It takes four steps to mature from egg to adult (egg, larva, pupa, and adult). A bee body has two pairs of wings connected by hooks, a proboscis, and body hair for collecting and transporting pollen, nectar, and floral oils. These features allow the native bees to be more effective at pollinating the native plants. After all, they evolved together.

In the US, we have about five thousand bee species. In Arizona, we have thirteen hundred of those species, making the state the most bee diverse in the country. Around seven hundred dwell in the Sonoran Desert, where they are very important in pollinating the native plants. I had no idea there were so many types of bees in such a harsh environment.

I tried to photograph a bee for this blog, but they were too fast for me to get a good photo. 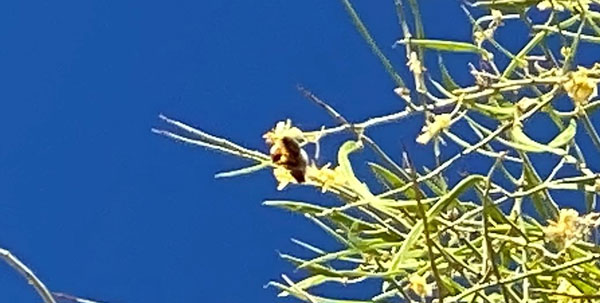 I believe this is a Centris pallida. This bee species prefers flowers that withstand hot temperatures. This is certainly true of the palo verde. The pollen often coats the bee’s fur, turning it orange. This species is important as a pollinator, of course, but also for enriching the soil. Tunneling aerates the soil, allowing for rainwater to penetrate, and their nitrogen-rich feces fertilizes it.

The native bees of the Sonoran Desert are a diverse group: different sizes, shapes, colors, food preferences, and living quarters. A few of note are the leafcutter and mason bees (Megachilidae sp.), the cactus bee (Diadasia rinconis), and the Sonoran bumblebee (Bombus sonorous). The leafcutter bees comprise 10% of the state’s native bee species. They create a variety of nests, including beetle tunnels in dead trees, or build them with mud or plant resins.

The cactus bee, as its name implies, pollinates many common cacti: prickly pear, cholla, and saguaro. Loss of these bees would mean no more prickly pear margaritas. Horrors!

One bee I have seen buzzing about in my garden is the Sonoran bumblebee. This large bee is hard to miss, not only due to its size but its bright black and yellow coloration. Bumblebees seem to lumber from flower to flower in contrast to zippy smaller bees. However, their buzzing isn’t always due to mere flying. Bumblebees sonicate, vibrating intensely to release pollen by blasting it out! We fear being stung, so it’s nice to know that our native bees are pretty easy-going.

The Buzz on Buzzing

If you’re out among the flowering trees of the Sonoran Desert this time of year, you will hear the incessant buzz of bees. The loud noise emanates from the vast number of bees doing their work among the flowers. Why are the bees buzzing so loudly, one might say, ominously? Is it a warning that I’m getting too close, like the rattle of a rattlesnake? No, the bee doesn’t really care about me, unless I attack her or her hive. The buzzing is from the beating of her wings at a truly unbelievable rate of 230 times per second. Wow!

Despite the rather concerning sound, the bees have no interest in the people strolling by. However, we humans should be interested in these industrious insects.

The Industry of Honey

First off, I should point out that the honey is made for the bees’ personal use, not as a staple for human consumption. There are over twenty thousand species of bees on earth and very few produce honey.

The bee we hear the most about these days is the introduced European honeybee, Apis mellifera. This species has been domesticated for pollinating commercial crops as well as producing commercial quantities of honey. Unfortunately, the occurrence of Colony Collapse Disorder is increasing, threatening the human food supply.

Now that you know we have hundreds of different types of local bees, I hope you will be looking at them more carefully. Each species is critical to the maintenance of this unique desert environment we have come to love. Now go out and spread the buzz about bees for World Bee Day on May 20th (and every day). And remember to be bee-wise!

Oh, and if you are interested in learning more amazing facts about native animals of the Sonoran Desert, buzz on over to my educational workbooks.