Insects Inside: A Transformational Season!

After a dismal, dry monsoon in 2020, last year was wonderfully wet. The Sonoran desert enjoyed the third wettest monsoon on record with 12.79 inches from June 15 through September 30. If you’re curious, the highest rainfall amount was 13.84 inches. As a result of all this rain, there was a burst of vegetation and an increase in insects. There were clouds of butterflies and moths! The most notable of the creeping critters were the big caterpillars.

In my humble opinion, these caterpillars are not only the most obvious but the most interesting of the monsoon creatures. After seeing some of the big moth larvae wandering about, it made me wonder just how big the moths would turn out to be. 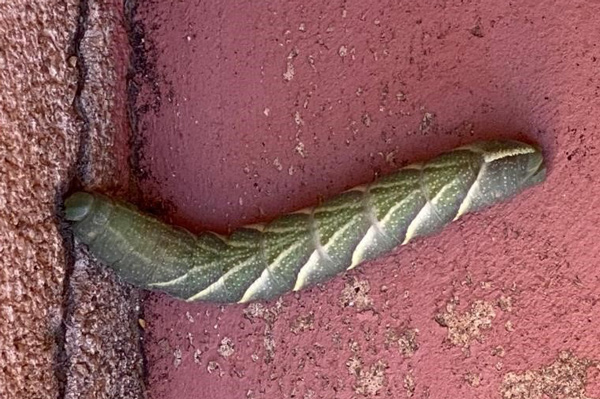 On my front porch, I found this massive green caterpillar. As a larva, this is known as a Tomato Hornworm Caterpillar, Manduca quinquemaculata. It is identified by its bright green color and V-shaped white stripes. A pointed projection on the rear is why it is a “horn” worm. The common name is derived due to its fondness for tomato plants as well as other crops, giving it a reputation for being an agricultural pest. They can eat up to four times their weight each day! Hornworms eat a wide range of plants since the garden-grown plants didn’t come along until after the species had been around a long time.

Once it pupates, this green larva emerges as a brown and gray moth, known as a Five-spotted Hawkmoth. Hawkmoths are important pollinators of plants with large white flowers by feeding on nectar. These plants include Datura meteloides Desert Evening Primrose Oenothera caespitosa and Wild Four O’clock Mirabilis multiflora. 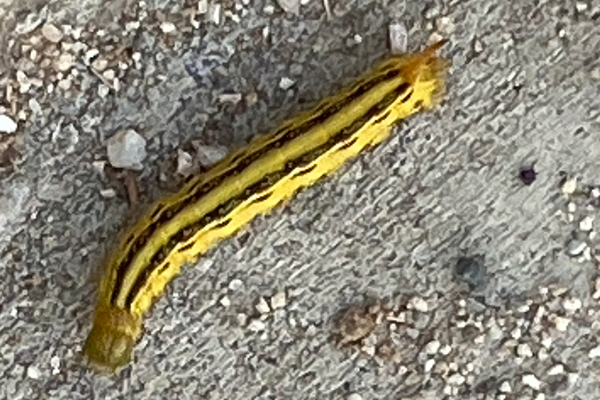 The next large caterpillar that crossed my path was this is Hyles lineata, a larva of the White-lined Sphinx moth.

The larvae come in a variety of colors, but in Arizona, they tend to be yellow. This caterpillar also has a protruding horn but its orange or yellow color is the most distinguishing characteristic of the species. They also are often found moving in large, very impressive groups! I remember the sidewalk where I worked completely covered with these caterpillars for several days each year. It was hard to step over all of them.

The adult moth is dark brown with a tan stripe, white lines, and a pink median band. The moth may be mistaken as a hummingbird due to its size and flight pattern. This is another moth responsible for the pollination of many plants while they drink nectar.

The Silk of the Desert

The third large caterpillar I came across is this dark-colored individual. 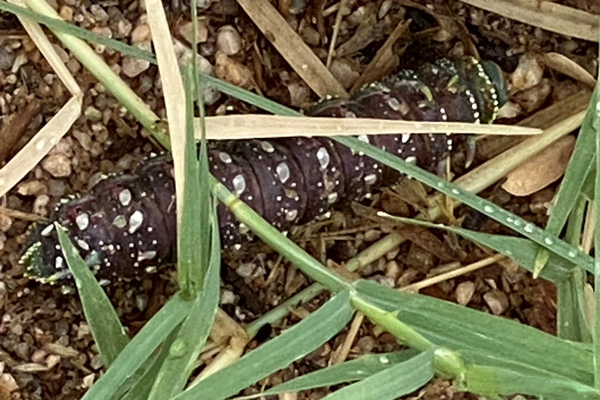 I had never seen one before. This is Hubbard’s Silk Moth, Syssphinx hubbardi. What looks like dots on its back are horns and stubs that extend upwards from the back. The silk moth larva feeds on acacia, mesquite, and palo verde. The smallish adult moth is dark gray on top, the forewing, but the underneath hindwing is a vivid red. Unlike the other two moths, these adults do not feed, so they are not pollinators.

I enjoyed learning about these remarkable Sonoran Desert insects and hope you did too. I look forward to seeing (and sharing) what next monsoon brings! In the meantime, I suggest you explore the other wonderful animals that can be found in the Sonoran Desert through my book series about that very topic.