You may have noticed, I really like iguanas. My philosophy about including them in my life is summed up on a mug I own: Iguanas are like potato chips, you can’t have just one. As a result, many iguanas have come into my home. Each year, I have up to twenty-six t a time. Many leave to go to other homes, but some stay\ with me as permanent family members. I’ve had green (Iguana iguana), spiny-tail (Ctenosaura similis) and rock iguanas (Cyclura cornuta and Cyclura lewisi nubila) as my scaly children. But I never really had an interest in having mammalian family members: no cats, dogs, rodents, or even hedgehogs. Until I retired and horses entered my life.

My interest in learning to ride horseback came about after going on one of those commercial trail rides. It wasn’t as pleasant as I had hoped. I thought if I learned to ride, my next trail ride would be more comfortable. But a trainer named Tali and a horse named Button changed all that forever. I assure you, I had no interest in leasing a horse, much less owning one! But life had other plans. 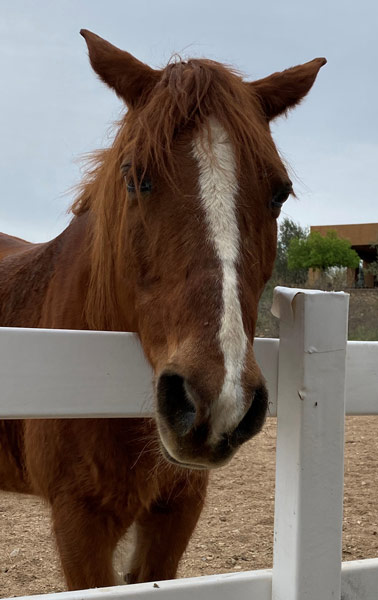 It was a bit rough in the beginning, but we got in sync eventually. Then I discovered she had cancer. Tumors filled her sinus. She had surgery to remove as much as the veterinarian could, but the lymphosarcoma had already penetrated into the bone of her skull. The prognosis wasn’t good, but we decided to try some Chinese herbs. She couldn’t have the usual steroid treatment, because of her Cushing disease. I set about making her last days as pleasant as possible. 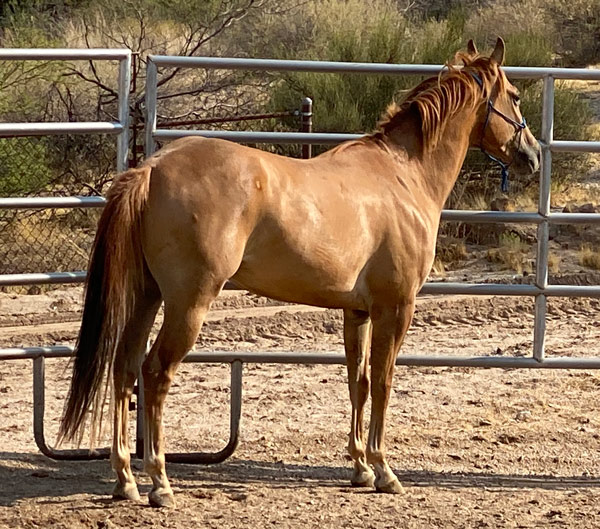 But I wasn’t ready to give up having a personal horse for trail riding. Button along with having a strong personality was very barn sour (wanted to be home) and buddy sour (needed to be with other horses). I was hoping for a younger horse (Button was eighteen years old at the time of adoption) that had fewer issues. I couldn’t find a horse online for sale. But in the stall across from Button, was a three-year-old gelding, Yogurt. I learned that the owner was interested in selling him. Since I’d known him for a year, I thought he might be a good choice. Fortunately, I had a fabulous trainer who was willing to work with a young horse and a ”young” rider, me. Trust me, not the best situation. But Yogurt, renamed Exuma, is a wonderful horse and I see a true partnership developing.

Meanwhile, the Chinese herbs are holding Button’s cancer in check and she is going strong!

My trainer Mike and I realized Exuma and I needed more intensive training than we were doing at my boarding stables. So, I trailered my horses and off we went to his training facility. Exuma, Button, the training horse Napolean, and I had lessons four days a week. We made great progress. Exuma’s ability and my riding skill were miles apart when we started, but we’re rapidly approaching equality. Sadly, my trainer died unexpectedly, but his widow picked up where he left off. Someday soon, Exuma and I will be heading out onto the trails. 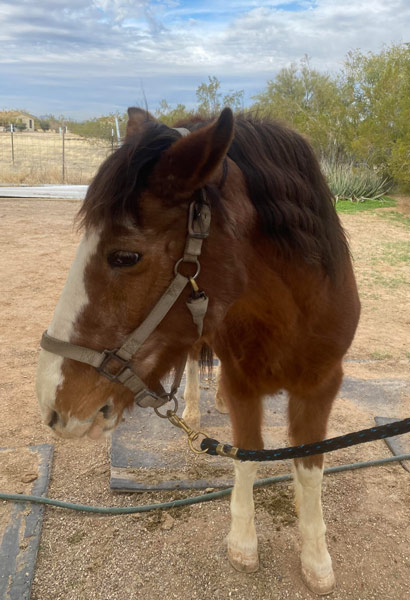 My improved riding ability is due to a marvelous mustang, named Napolean. He had been captured as an adult and was used to herd cattle, give child rides, and train “young” riders. He is a phenomenal lesson horse. He knows what needs to be done, but makes the student work for it. He doesn’t get upset with bad riding and is very patient. But he does seize opportunities to express his own desires, like when he thinks it is time to head back to his stall. He isn’t mean about it but can be very assertive. I’ve learned a lot from him.

You may be wondering why I just can’t use my mare as my lesson horse. She’s a gaited horse, while Exuma is not. Riding them is very different. A gaited horse always has one foot in contact with the ground, making the ride smoother than a non-gaited horse. Napolean is teaching me the ways of non-gaited riding.

But Napolean didn’t belong to my trainer. No, he was allowed to be used for lessons by the owner. I am very grateful for her generosity. However, with my trainer’s death, Napolean’s owner considered taking him back to her house. I still needed Napolean to improve my riding skills. I could practice techniques on him that I needed for the much less patient Exuma. I did the only thing I could do, I bought Napolean. You may think I’m crazy to buy a twenty-eight-year-old mustang, but I want him to grow old with me, to share his wisdom with me, to make me the best rider I can be. I sincerely wish I could write his memoir. If only I could speak horse.

How quickly my life has changed. Not only do I have a multitude of tortoises wandering around my house, many iguanas bringing me joy, I now have three horses to ride. My animals bring me a sense of peace and a release of stress. It may not be cheap, but it’s fulfilling. For those of you who think you know where life will take you, I suggest you be flexible. I am truly on the road less traveled and loving every minute of it.