Elaine Explores Chemistry… with a Seashell?

Have you ever considered what an amazing substance calcium carbonate is? I hadn’t until recently. Calcium carbonate, the chemical formula CaCO3, is all around us in daily life. It’s used as a dietary supplement, an antacid, and for stomach upset. Calcium carbonate, also known as calcite, occurs in rocks, such as limestone, and those stalactites and stalagmites in caves. It’s the active ingredient in agricultural lime but can be a problem when it reacts with calcium ions in hard water to create limescale. Calcium carbonate is also a major component of eggshells, snail shells, pearls, and seashells. Most importantly calcium carbonate is the subject of this blog!

My interest in calcium carbonate is the result of meeting this magnificent creature. 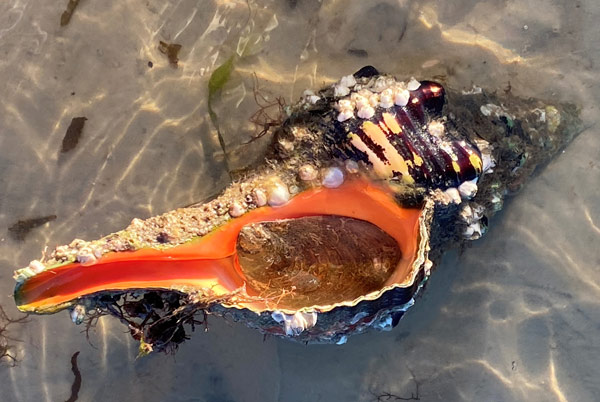 This is the mollusk known as a Florida horse conch, Triplofusus giganteus. I was impressed with the heavy structure and the vivid colors of the shell. The Florida horse conch is a very large predatory gastropod mollusk. They can reach up to sixty centimeters, or two feet, making them the largest gastropod in the United States and the second-largest in the world. However, despite the common name, this snail is not a true conch, family Strombidae, but is a member of the tulip snails!

Not only is the shell long, but it also has a great deal of heft to it, over ten pounds. I got to wondering just how the mollusk created such a structure to protect its equally massive body. As mentioned previously, most seashells consist of calcium carbonate. This versatile molecule is used to create the wide variety of shapes and sizes required by the multitude of mollusks for their survival. 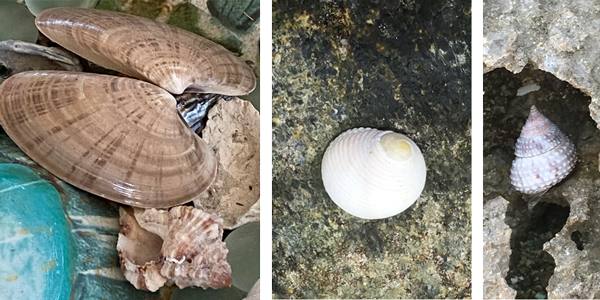 Sometimes another mineral, aragonite, is also incorporated in seashells. Aragonite has the same chemical composition as calcium carbonate, but the atoms are arranged differently. However, aragonite is unstable. Under normal conditions, it will revert to calcium carbonate. But somehow, mollusks maintain aragonite’s structure. An example of a mollusk using both aragonite and calcium carbonate is blue mussels, a commonly consumed mollusk. Calcite is found on the growing edge of the shell, while aragonite is layered internally. The inner layer, nacre, has a shiny, pearly appearance. The lustrous interior is the result of light diffraction from aragonite’s plate-like structures. In contrast, calcite has a three-sided shape.

The process of shell construction is called biomineralization. The snail’s mantle, the part that extends out of the shell, secretes the fluid required for shell deposition. First, a layer of protein is laid down, then the calcium carbonate is put on it. Although the details are not fully understood, it’s believed that the proteins bind the calcium carbonate into place and make it resistant to being dissolved by water. In addition, the proteins help the mollusk create a crystal lattice pattern that is unique to each species. Biomineralization is also used to repair damage to the shells.

A gastropod produces a spiraling shell, creating ever bigger chambers for its body as it grows. However, this spiraling is not done randomly, but conforms to geometric standards, termed a logarithmic spiral. Most modern-day mollusk shells spiral to the right. Very rarely, some shells rotate to the left.

But What About Color?

Calcium carbonate is white. So how does the mollusk make such vivid colors in its shell? Horse conchs are known for their orange colors. Baby horse conchs are solid orange and become brown as the shell grows, but the snail’s foot remains bright orange. Pigments are obtained through diets. Carotenes and carotenoids provide them with yellow, orange, and red colors. Think carrots. Pigments are inserted in regular patterns for stripes or spirals, while irregular patterns produce spots or splotches. 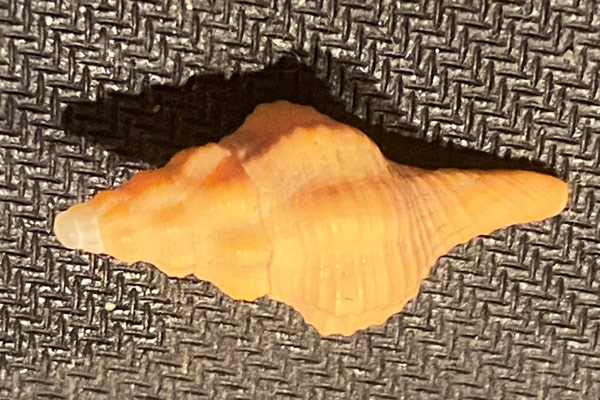 It’s thought that mollusks in tropical waters produce more varied and colorful shells due to a greater diversity of food available. But why seashells are so colorful is not understood. Some of the patterns are useful for camouflage. But what is the purpose of the bright colors inside the shell? And why would a predatory mollusk like the horse conch want to have such bright colors? It’s not a warning about being poisonous to other predators and prey would see the conch coming. I have many questions.

The shells also contain dark pigments, melanins, as well as tetrapyrroles. The most famous tetrapyrrole is hemoglobin, which transports oxygen in the bloodstream, and chlorophyll.

Having researched the production of a gastropod shell for this blog, I think I understand its construction a little bit more. And I hope you do too. But there is still so much to learn about these amazing snail-produced structures. Looking to learn more about life around the ocean? Check out my wonderful and educational workbooks.

P.S. The young horse conchs found on the Sanibel islands have white tips. This was my father’s favorite shell. I’m always looking for one of these treasures, even if it’s merely the calcium carbonate shell of a marine snail. This blog is for you, Dad!