All About Saguaros of the Sonoran Desert

My current hometown is Tucson, Arizona, located within the Sonoran Desert. This area is known for its many unique endemic plants and animals, such as the iconic large cactus, the saguaro (Carnegiea gigantea). These columnar cacti are a symbol of the US Southwest. One glimpse of a saguaro in a movie or illustration and you know exactly where the story is set. Join me in exploring these iconic cacti of the Sonoran Desert.

Throw Your Arms in the Air (Just Like a Saguaro)

The saguaro is a fascinating plant, each one slightly different from the next, usually because of its branches or arms. Here are a few examples.

Some saguaros don’t have arms. They’re called a “spear.”

Some have short, round arms.

Some have long arms.

Some have both long and short arms.

It’s not known what determines the number and shape of the arms. The purpose of the arms is believed to be to store water, very important to a plant in a desert.

I admit, I spend a lot of time looking at all the saguaros and I’ve discovered that saguaros often have another trademark. Many have holes. Often these holes are created by Gila woodpeckers (Melanerpes uropygialis). They, and other bird species, use the saguaro holes for nesting. In addition, due to the saguaro’s height, many hawks utilize them as resting and observation spots.

One amazing sight always intrigues me. I have seen several saguaros that have another cactus growing on them. Yes, a cactus on another cactus! Most of the cacti I’ve observed growing on saguaros are Engelmann prickly pear cactus (Opuntia engelmannii). These prickly pear cacti are unintentional epiphytes. Prickly pear cacti have deep red-colored fruit filled with seeds. Many animals, including people, eat these fruits and then disperse the remnants once they’ve passed through the digestive tract. Since birds use saguaros as platforms, they deposit the seeds on the saguaro. When a seed is dropped, it must grow where it lands, even if it is far above the ground. But, what are the prickly pear cacti living on? Perhaps some detritus built up at the crooks of the saguaro’s arms, providing some soil for the prickly pear to grow. Either way, an epiphytic prickly pear won’t reach the size of its ground-dwelling kind. 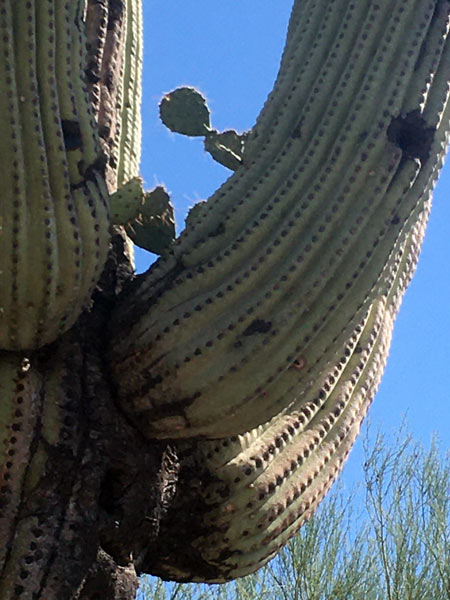 Saguaros are not the only unusual place for other cacti to grow. I recently needed to have my flat roof re-coated with sealant. As my roofer cleaned the accumulated debris from the roof, he discovered a cactus growing underneath one of my solar panels! Once again, I suspect a bird as the source of the seed. The roofer carefully brought the cactus down, and I have now planted it in my yard. I’m not sure what species of cactus it is. It kind of looks like a rabbit ear variety of the prickly pear. I have a patch of them in my front yard. As it grows, I hope to be able to identify its species. 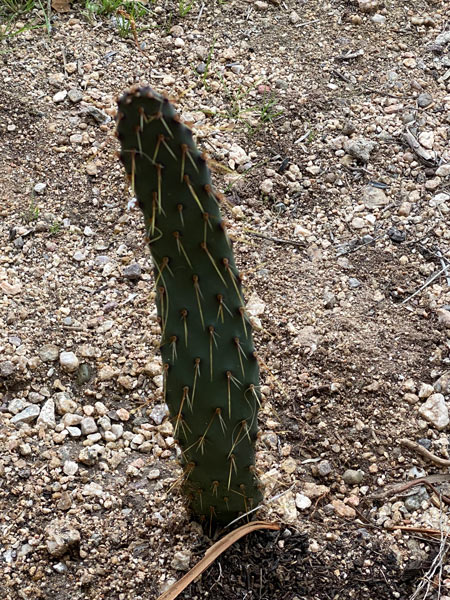 As you can see, saguaros are not only iconic but a very interesting part of the Sonoran Desert. Are you interested to learn more about plants and animals of the Sonoran Desert? My downloadable workbooks on Lyric Power Publishing are just the thing. Find out about rattlesnakes, roadrunners, and more!