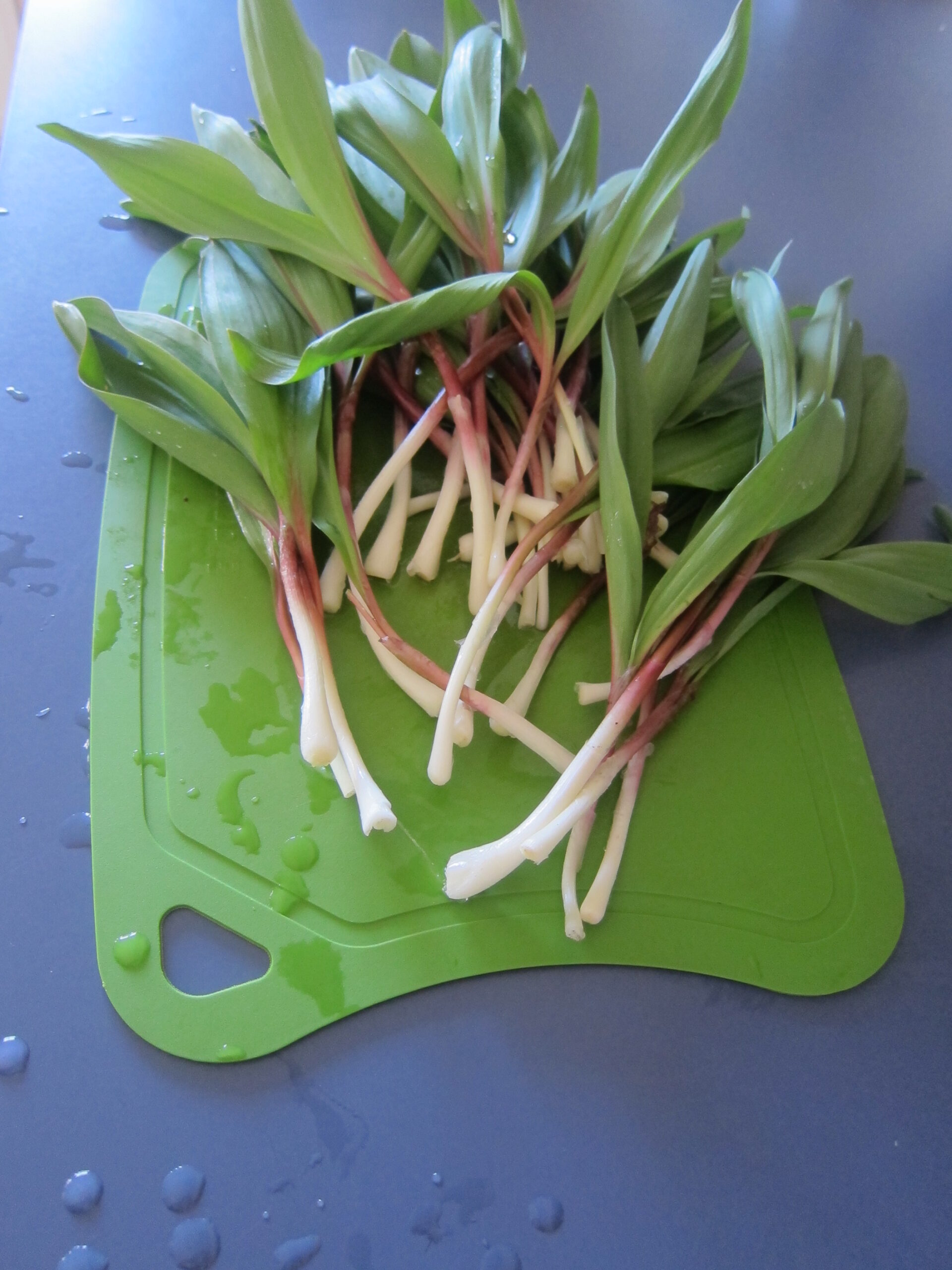 Little spring beauties (Claytonia virginica) were just starting to bloom as I went up the trail into our woods to pick a supper’s worth of ramps. These wild onions, Allium tricoccum, which are native to Eastern US, are the first wild food of the year to find a place on my table. Ramps are called by many names, including wild onion and wild garlic. They are pungent and contain qualities of both.

Where the trail turns to the right and levels out, the ramps come into view, at first small clumps of six or eight plants, then in colonies of hundreds. I chose a comfy seat on a moss-covered log in the soft April sunlight. I pulled out the asparagus knife (also called a dandelion digger) and dug up robust looking plants.

Ramps grow in a variety of settings, though they tend to proliferate in damp spots. I have read advice about picking them that states they are shallow-rooted. That may be the case when they grow in sandy stream banks, but here in a woodland in rocky New England, I have to dig deep to extricate the whole bulb from the tangle of maple roots and buried rocks. It is rare that I get the bulbs out intact. Soon, though, I have harvested enough for the ramp and potato soup I am planning for supper (recipe below). I will come back in a few days to pick more for mushroom lo mein.

The name “ramp” is said to derive from an Old English word “ramson,” a common name of the European bear garlic (Allium ursinum). As often is the case, English settlers applied the common name of a familiar plant from home to a similar plant they found in the new world. Ramps were also known to and used by the native people of Vermont. That connection is still visible in the name of the state’s third-largest river, the Winooski. “Winooski” is an Abenaki word meaning “place of the wild onions.”

Using ramps to cook a simple soup that might have also been made by the farm family that lived on this land several generations ago is very life-affirming for me. It is the taste of early spring when new growth is just beginning and hope blossoms.

Here’s the recipe I use for the ramp and potato soup:

Jo Busha is the author of Time and the Garden, a collection of essays written over a ten-year period about gardening, life in Vermont, and observations of the natural world. It is arranged by season, but not all the essays have a specific seasonal connection. It will appeal to gardeners, readers seeking a strong sense of place, and people interested in rural living, even if they aren’t able to live it. This place, where Busha has lived for 45 years, has played a huge role in her life. While not a how-to book, gardeners may find the essays instructive. Booklovers are likely to feel this a cozy read, warmth for a snowy day.