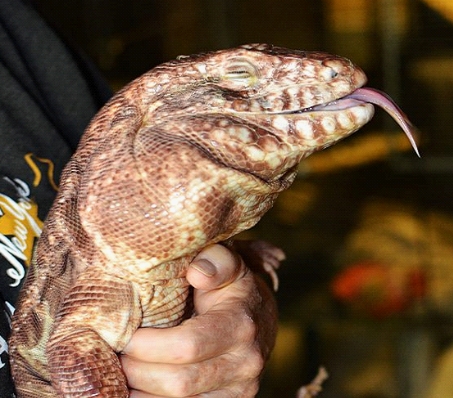 You might have seen the news lately about an aggressive giant lizard invading Georgia. For conservationists in Florida, this wasn’t surprising. They have been fighting this invasive lizard for years. When people hear the name of this large lizard, they ask the same question I am asked when I talk about the reptiles I live with: What is a Tegu?

A tegu is a large lizard from South America. I describe them as a linebacker lizard because the males don’t have a neck that shows. Massive jowls extend down to the shoulders. Tegus are omnivores and intelligent. They are docile and can be housebroken, making them popular pets.

The species of tegu in the news as an invasive is the Argentinian Black and White Tegu, Salvator merianae. I had one when I lived in New Jersey. I named him Rory, short for Rorschach, because his color pattern reminded me of the ink-spot test. I donated Rory to an educational program where he was very popular. He would welcome each child as he or she came into the room.

Sadly, when these tegus were released into Florida, their aggressive appetites were revealed. Tegus will eat anything they can swallow. They have very large mouths. They are also very hardy, able to withstand the colder temperatures as they have moved north. They are significantly damaging ecosystems as an invasive species.

I currently have a Red Tegu, Salvator rufescens. He is named Rascal because it took him only eight minutes to escape from his first enclosure, one that had been reinforced to prevent him from doing just that. Not only is his color glorious, but he is also quite cuddly. I would let him free roam, but I keep finding him with Trevor Box Turtle in his mouth!

Tegus in North America should be kept only as beloved family members and not roaming free outside, damaging the environment. Interested in reptiles? At Lyric Power Publishing, LLC, we focus on fun, science-based books and workbooks. Check them out!

Category: From the Publisher
Leave a Reply Cancel reply
CURTIS CURLY-TAIL COMES ALIVE ON YOU TUBE!