Please join me in celebrating World Sea Turtle Day on June 16. I have been honored to personally interact with a few sea turtles. I remember a wonderful snorkeling trip where I spent the time swimming around the reef with a Hawksbill turtle. Female Loggerhead #1295 will always be very special to me, since I tagged her on the beach on Sanibel Island. I hope she is still out there living the ocean life.

Turtles live in freshwater or saltwater.  June 16th celebrates those that live in the oceans. This date was selected because it’s Dr. Archie Carr’s birthday. Dr. Carr was a pioneer in the study and protection of sea turtles. He realized the importance of sea turtles to the ecosystems.  Leatherback and Hawksbill Turtles are predators of jellyfish and sponges, while Green Sea Turtles ensure sea grass is kept short. These actions are necessary to keep marine life healthy and in balance.

Sea turtles have been around since the time of the dinosaurs, mostly unchanged. Once you’ve got a good model, stick with it. Unfortunately, their existence is threatened in modern times. They may become extinct soon despite being around for 110 million years.

It’s estimated that as few as one in 1000 turtles survives from egg-hood to adulthood. The difficulties created by man start during nesting. People dig up the eggs illegally—this is called poaching. Some people eat the eggs as a food source, but others think they’re an aphrodisiac. More disgusting are people who kill the female turtles to remove the eggs before they are laid, believing that the eggs are more potent then. Not only are the current batch of eggs destroyed, but so is the female and her future babies.

Lights from buildings attract the hatchlings inland instead of them heading out to see.  Beaches covered with litter make it difficult for the females to create their nests and that same trash prevents the hatchlings from reaching the sea. Hatchlings have a hard enough time digging their way out of the nest, crawling over the contour of the beach, while avoiding natural predators without humans throwing up all these obstacles. Plastic pollution is causing extreme danger. Fifty percent of sea turtles are known to have eaten plastic, mistaking it for their food. Plastic bags look a lot like jellyfish.

We are causing the extinction of these animals needed for the preservation of our oceans, which are the source of a great deal of our food. It is up to us to save them and thus, ourselves.

Lyric Power Publishing is proud to offer substantial and comprehensive WORKBOOKS to supplement the education of children. They are used by teachers, parents and tutors. My Book About Green Sea Turtles is full of information about these amazing creatures. 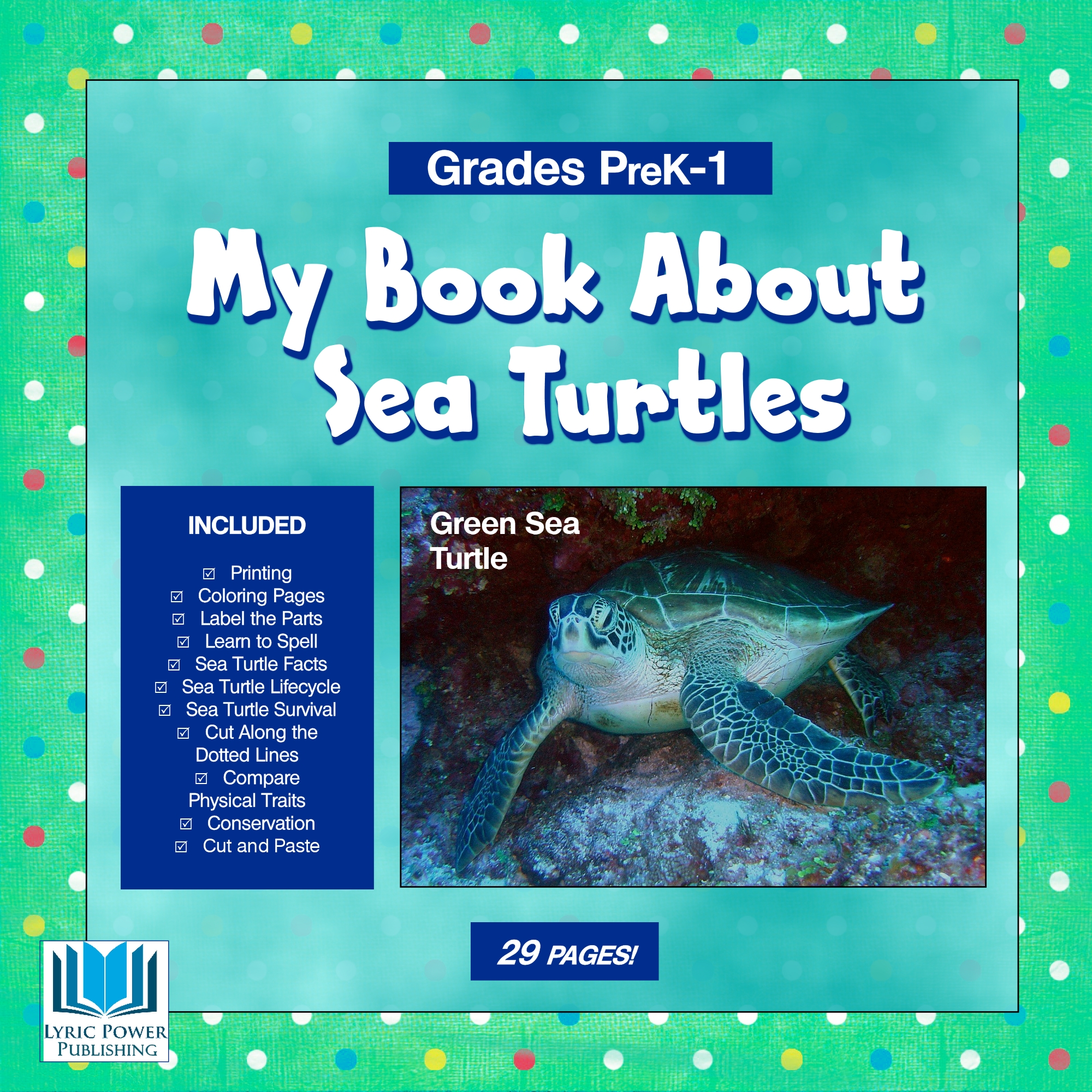